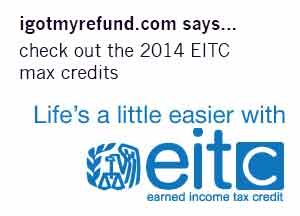 Will I qualify for the Earned Income Tax Credit this year?

Your income may have changed or you might have separation/divorce issues that can change circumstances. When you file your tax return in 2015 for the 2014 tax year, income limits ad tax laws may have been updated.  Below are the maximum credit amounts for Earned Income Tax Credit for tax year 2014.

To qualify for this credit, it is based on several factors to include your adjusted gross income (AGI).  Tax Year 2014 (for which you will file your return in 2015) earned income and gross AGI must both be less than:

Also to qualify for the credit, there are rules that must be followed or your return could be subject to an EITC review which could delay your refund.

Read more about the EITC qualifying child rules to make sure you maximize your refund in 2015: