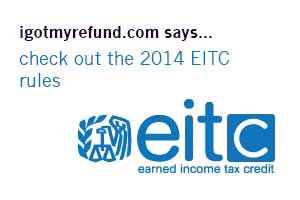 Filing for the earned income tax credit is a major credit that can increase your tax refund.  It’s important to ensure you qualify before taking this credit or your refund can be delayed.  The guidelines for a qualifying child are generally easy to understand.  Divorce, separation, custody rules for EITC can be an argument between parents and caregivers and EITC rules can get confusing.  Know the earned income tax credit qualifying child rules.

So what are the EITC qualifying child rules?

What if my child…

Questions and concerns can arise from these seemingly easy rules.  Many of these questions arise for EITC parents who are divorced or separated and arise over the Child Tax Credit too.

In some years, EITC related refunds were delayed because a large number of people have filed for EITC and the child did not meet certain criteria.  You can be audited, charged additional tax, pay penalties and interest if you improperly file for the EITC.  Don’t risk it and be sure you qualify.

The IRS also has many resources than can help answer these common but sticky questions about the earned income tax credit:

Do I Qualify for EITC?