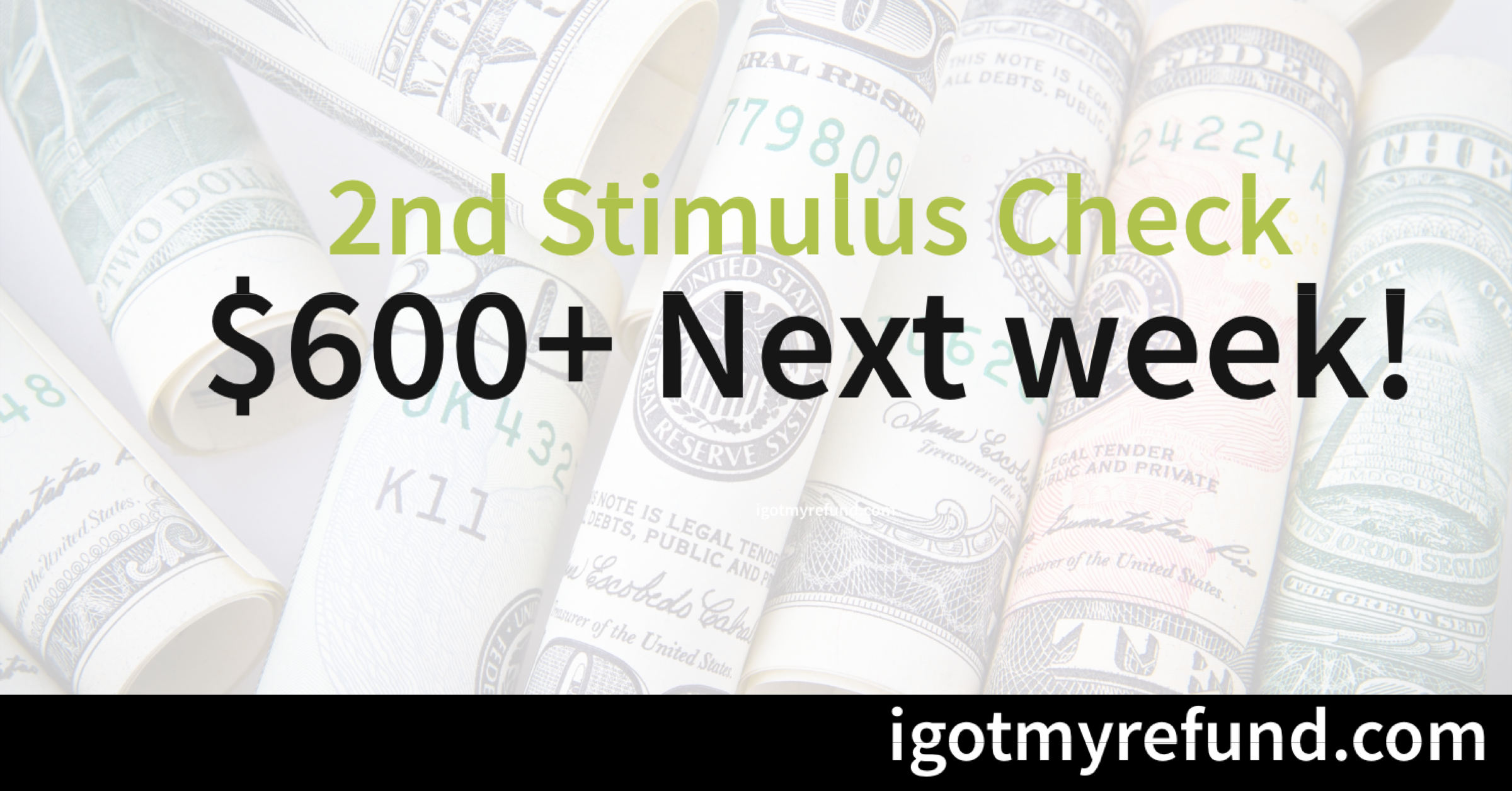 When is the $600 second stimulus coming?

Congress finally agreed. As early as next week, a second round of stimulus direct payments of $600, $1200, or more could be in your bank. Some people will also continue to see $300 extra unemployment benefits for 11 more weeks. We always caution to wait until the money is in your bank, but according to the Treasury Department, once Trump signs the bill, the second stimulus payment could hit as early as next week. The latest economic relief package was shamefully overdue, but finally came to fruition last night as part of a package to fund the government until September 30th.

With almost all the attention of the public desperate for additional checks, now we’ve really perked up after Steve Mnuchin’s comments that some people will see stimulus direct deposits as early as next week. He also said $2400 for a family of four would take us through recovery (…yeah right buddy…ok…) Almost every economist agrees the compromise of $600 direct payments is insufficient to aid economic wounds suffered by Americans affected by COVID-19. But that’s a topic for later.

We flipped through the 5600 page bill that was finally published after aides struggled with a corrupted file (…likely excuse…). It could be the longest ever bill which includes economic relief provisions set to expire and some new help on the way. (It also includes 2 new Smithsonian Museums… what the fuck, were we waiting on that? What’s that pork?). Again, that a topic for later. Millions of Americans fell into poverty and tons of small businesses closed doors while we waited and the parties duked it out.

The second stimulus package mostly follows the same rules, but it doesn’t mean that if you got the first you will be getting the second. Here is what we found so far.

Who qualifies for the second stimulus check? The qualifications have not shifted radically. Small changes from the last stimulus check don’t seem to be that significant, but it’s still a tangled web for some people. Things have changed that affect dependents and specific family types. But, don’t assume you qualify for the 2nd stimulus payment, just because you qualified for the first. Keep reading.

The stimulus payment will still be based on 2019 AGI and has an upper limit. Yep, you heard that right, 2019 AGI, NOT 2020. So when you start to examine if you qualify, look at Line 8b of your 2019 tax form. Didn’t qualify the first time? Keep reading. Like before, as you reach the upper limit, the amount you receive can decrease. If your 2019 AGI exempted you the first time, but your 2020 financial situation has changed… you don’t get the second stimulus check. Instead, you will be able to claim it as a credit against your 2020 taxes. If the situation is reversed and you earned more in 2020, you will still get the second stimulus check. How bout them apples?

$600 for individuals and there is also a benefit of $600 for each dependent this time around. The amount phases out as you reach the upper income limits.

How Will I Get 2nd Stimulus?

Like last time, if the IRS has your banking info on file from your federal taxes or the first stimulus payment, you will get a direct deposit. (Banking info changed? Still not on file? You are looking at a paper check or prepaid card.)

When will I get 2nd Stimulus?

Remember, Mr. Mnuchin said it will be very fast. He emphasized it could be as early as next week. It shouldn’t drag out like last time. If no banking info on file and the IRS hasn’t sent your stimulus by January 15th, you can claim it when you file in 2020.

Same as last time. Non-filers (such as SSDI and SSI recipients) will automatically get the second stimulus.

Older than 16, under 24… nope, doesn’t qualify as a dependent. So if your’e not a child accordingly to the stimulus guidelines, you still not be considered an adult.

You didn’t have to be a US Citizen to receive the last stimulus payment. The first time around, you needed only a social security number and to be working in the US. If you are a non-resident alien, you might be out of luck. (Non-resident alien is someone who hasn’t passed the green card or substantial presence test.) However; this time, if your spouse is a non-resident alien it’s not so much of a problem. Before, you got screwed because neither qualified if they filed jointly, neither did their dependents…even if the child was a US Citizen. Your family could be eligible as long as you meet other requirements this time around.

Nope. Still a no. States can still garnish the amount you owe if it’s over $150. Owe less than $600, but over $150? In that case, the amount you owe will be garnished and you get the remainder…just like a tax refund. But if you owe more, your entire stimulus check could go to the other parent.

Correction: The second round of stimulus cannot be garnished.

It also means that if you’re owed child support, you will not receive money taken from your child’s other parent in the next direct payment.

It’s still unclear. The first time around, inmates were deemed eligible…then it changed and interpreted as ineligible. A judge had to sort that one out. It was finally ruled in court that inmates were eligible because the Cares Act didn’t specifically exclude them. But surprise surprise, the IRS appealed the court’s decision. Even so, they still sent paperwork to inmates who could still file by Nov 21. It’s a clusterfuck essentially. Inmates will need to wait on the final court ruling after appeals.

Other notable parts of the legislation…

Pandemic Unemployment Assistance (PUA) could get more difficult for some. The new legislation calls for people to provide proof of income loss. In the last bill, some people were able to qualify merely by certifying they lost earnings with little evidence.

You can qualify for certain tax credits using 2019 or 2020 AGI which aides some low income workers who lost their jobs or became “under employed” earning less money during pandemic and could face losing out on full credits such as Earned Income Tax Credit (EITC) and Child Tax Credit (CTC) since that credit requires you to work.

Mixed income workers claiming unemployment could now be eligible for an additional $100 per week. This is for people previously left in the cold who earn money as both employees and freelancers, contractors and gig workers.