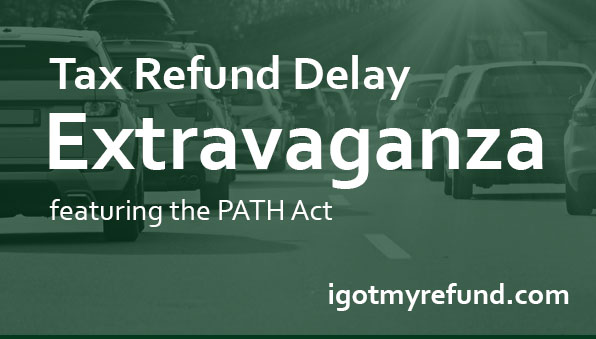 Most people already know about the tax refund delay for 2017.  This isn’t because the IRS just feels like holding your money for fun this year. The IRS introduced us to this back at the end of 2015 but some are just finding out about it now.  Let it be known– if you claimed the Earned Income Tax Credit (EITC) or Additional Child Tax Credit (ACTC) on your 2017 tax return it will be delayed, if you are an early filer.  So if ya don’t know, now ya know!

New for 2017, even if you file your return and it gets accepted early, refunds with the EITC or ACTC won’t be released until February 15th according to the IRS. A new law took affect in 2017 that requires these type of refunds to be held.  What!!!? This is what will cause the tax refund delay. We wrote about the new law here in our PATH Act post where you can read more about the actual bill itself. The IRS isn’t being being a bully by holding on to our refunds.They are just the agency that carries out the what the the PATH Act requires. Don’t let yourself get into a pickle. Plan ahead.  I know it may seem like a punishment, but the IRS has been trying to stop ID theft and fraud.  They are hoping with this delay that they can ensure refunds get into the proper hands and keeping them from ID thefts and people who fraudulently claim these credits. The IRS believes many of these illegal returns tend to be filed early in the tax season. They have been getting skewered by the U.S. Treasury Inspector General over these matters. If you want to read more about these recommendations (butt chewings) and see the mechanics of the  new law, head over there to that PATH Act post.

Will the tax refunds be deposited on February 15th?

You very well could wake up to a tax refund deposit soon after February 15th.  We don’t know when the deposits will be sent.  That remains to be seen. But the IRS is saying don’t count on it until end of February.  We expect those with Netspend cards and similar types of cards who post deposits earlier than some banks to see deposits first.  But as the story always goes, it’s all speculation until the IRS refund machine starts pumping out deposits.

Let’s be real, there is always some sort of glitch.

We are not sure what is store for us this tax season, there always seems to be some sort of glitch every year. It’s easy to wonder if the new procedures will cause even more of a delay.  I can’t imagine a January or February without tax refund mania. We have come to expect the three ring circus and accept the daily nuttiness from our early filers (myself included). Count on the tax refund grapevine at igotmyrefund.com to help.  If you need more information please post a question and we will try our best to get you an answer. Also, search our site we have tons of information on many different topics.