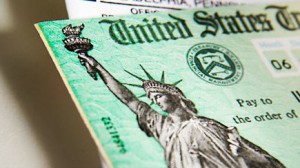 Are IRS and e-file technology glitches the trend?
Yes it is only mid August, and I am beginning to think about 2014 tax season.  What have we learned from the prior tax refund delays?  In 2012, after many people experienced major refund delays caused by the mess we saw with the IRS newly implemented software system (Modernized E-file) aimed at reducing fraud, some early filers said next time they would wait to e-file until later in the season.

Maybe some people waited to file, but we saw a repeat of extensive refund delays in the 2013 tax season.  The major debacle seemed to center around IRS needing to back the date to start accepting returns and of course, Form 8863 for those who filed with H&R Block.  Based on my experience the last two years, watching thousands of taxpayers on our site and Facebook in limbo with what seemed to be a never ending wait for their refund, I have low confidence that there won’t be something that causes a ruckus in the 2014 tax season.  What will it be?

The IRS e-file system typically goes off-line in October; presumably, this is when the IRS gets started on the system’s annual make over and patches necessary in preparation for the next tax season.  And they surely have their work cut out for them this year with new regulations under the Affordable Care Act (ACA)– no doubt the system changes are under way to handle new reporting requirements, change to W2 form, new health insurance tax credits and itemized deductions that people can claim this year (which you can file for in 2014).  But I ponder if these type of system changes will throw us early filers for a loop again in some way.  And after H&R Block fumbled the ball during the 2013 tax filing season with the 8863 Form debacle, I wouldn’t be surprised to see this type of problem again; whether it be H&R Block, TurboTax or some other tax preparation software–which will all need tweaked for the new reporting changes.  Heck, the W-2 form itself is undergoing a makeover this year.

I am going to put on my Google goggles and snoop around the net for anything relevant that might impact the 2014 tax season kickoff and report back here soon (can’t wait for the day I can say put on my Google glasses #ifihaveglass one day.)

What do think might cause 2014 tax refund delays or throw us early filers for a loop?