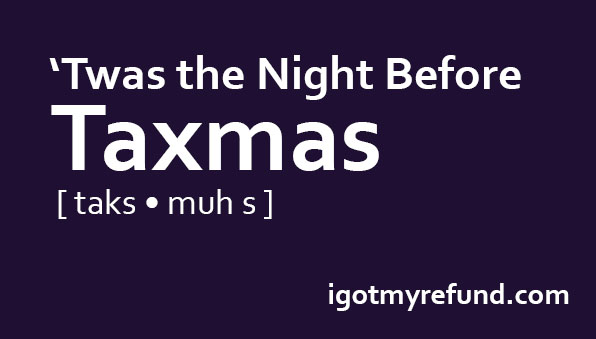 ‘Twas the night before Taxmas, I sat at the table;
I planned to file taxes, as soon as I was able.
The children were asking, for new gadgets and toys;
so they could have things, like all other girls and boys.

Sadly for them, I had ideas of my own.
I had planned to pay bills, and pay some of my loans.
I thought about a refund, covering all of the debt;
But I didn’t count deductions, or find my AGI yet.

The credit card payments were all falling behind;
It was the number one priority, on my mind.
I spent the night counting my tax credits and forms;
So I could e-file, when the sun came up in the morn.

I put down my head, to rest for a short time;
my eyes were so weary from going line by line.
I dreamed of vacation and piles of green dough,
Taxmas was coming! And we could possibly go!

I slept for three hours and woke up in some drool;
I needed to finish because a refund would rule!
Brewing some coffee, I hoped for an upswing,
Then I sat down to finish my tax filing.

It didn’t take long, until it was all said and done;
I pushed submit and began to think about fun.
“I’m getting a refund!” I shouted giddy with glee,
I began to sulk, the PATH Act came to memory.

The EITC and ACTC entered my mind, and it became clear,
that my refund wouldn’t come ’til late February this year!